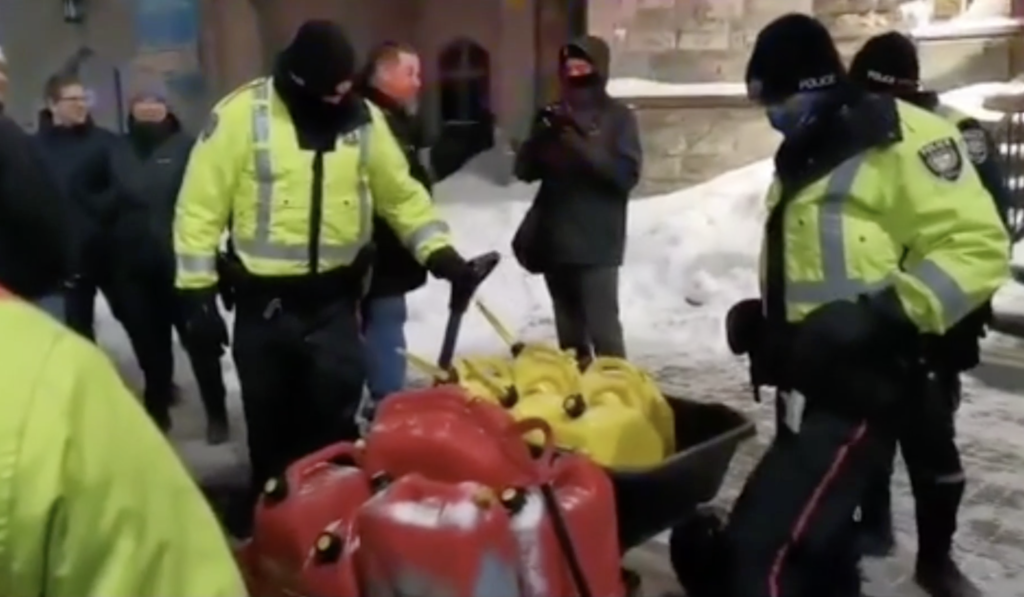 Last night’s show of inhumane and robot like actions by the Ottawa Police confiscating fuel (video below) and threatening arrest of individuals that provide the truckers with aid has united freedom groups right across Canada. Signatories of this press release include ex-police and military, doctors, politicians and various groups representing a cross section of the Canadian population. Some of the names include:

What is very important to remember is that some of these truckers are with their families. Some have toddlers, wives and children with them.  In Ottawa winter temperatures can dip well below -20 degrees Celsius.  The fuel taken by the police is vital in helping to heat tents the truckers have been staying in. Fuel from volunteers and supporters of the convoy was amongst the supply that was confiscated. It has come to light that police threatened arrest of aiding and abetting to anymore bringing supplies and materials to the truckers.

Ottawa’s Mayor, Jim Watson announced a state of emergency in the city, condemning what has been people’s Charter right of peaceful assembly. He issued the statement: “The situation at this point is completely out of control,” Mayor Watson said. “The individuals with the protest are calling the shots. They have far more people than we have police officers.” Interestingly what lies in the statement is inherent proof that despite the sheer size of the freedom convoy and its’ supporters, that things have stayed completely peaceful. If anything this is illustrative of the fully appropriate and positive way in which Canadians supporting the cause have exercised their right to assembly.

Further, the Ottawa Police Service issued that the convoy has: “…a well-organized supply chain – including a community kitchen and bouncy castles for children” which “has sustained the protesters…”

To the outside world, what’s come out of the Mayor’s Office and Ottawa Police Service looks like a dirty tactic. The truckers and their supporters are keenly aware of what is trying to be played out by the so-called powers that be and have been non-reactive to baiting, have complied with police and not displayed any violence or push-back, even though there were reports from truckers that some members of the Ottawa Police were extremely aggressive in their enforcement of the rules that have been brought into effect.

Further, last week, federal Canadian government officials asked that all trucks in the convoy be towed away but this was met by refusal of the towing companies, many of which responded that they had Covid-19.

Ottawa’s downtown residents and city councilors have been putting pressure on the police to “do something about this” situation and many are very displeased with the way things are being handled.

We think at least that’s one thing BOTH sides can agree upon.

We, the undersigned, wish to make the following statement based on the fluid events unfolding in Ottawa in relation to the Freedom Convoy.

The Charter of Rights and Freedoms (Section 2c) guarantees every Canadian’s right to peacefully assemble and the right to protest.

For nearly two weeks, Canadians with their families and children from all over the country from diverse ages, races, ethnicities, religions and beliefs have gathered in our nation’s capital to exercise this protected right in unity, peace and love.

Many of the undersigned have attended and are still present in Ottawa. We have witnessed peaceful demonstration and have observed multiple acts of humanity which define what it means to be Canadian. These acts include providing meals to the homeless population, tidying the streets of trash and snow, keeping watch of the tomb of the unknown soldier and other monuments, and assisting business owners with tidiness while providing patronage to their establishment. There is overwhelming recorded evidence and testimony to substantiate what we have witnessed first-hand.

The corporate media’s coverage of these events does not accurately depict what is transpiring.

The government’s decision to block refueling of the trucks in the midst of winter puts fellow Canadians and their families, including their young children in danger due to the extreme cold temperatures currently occurring in Ottawa. Regardless of where one stands on this topic, these actions are inhumane, undemocratic and do not align with Canadian principles.

The spirit of the cause in Ottawa is that of peace and coming together as a nation. We will continue encouraging the non-violent nature of the protest and non-interference with emergency vehicles and businesses established in the area.

If Canada truly is a democratic nation, then we call on our duly elected members of government to engage in meaningful dialogue consistent with the Charter of Rights and Freedoms. To unjustly smear and label those protesting the severely overreaching public health orders as terrorists, racists and misogynists is unacceptable and creates further divide.

“I am a Canadian, free to speak without fear, free to worship in my own way, free to stand for what I think right, free to oppose what I believe wrong, or free to choose those who shall govern my country. This heritage of freedom I pledge to uphold for myself and all mankind.”

We need YOUR help! Keep WHM alive and running by donating at the top of the site, or by clicking here. Thank you so much!