After almost two years of harsh and oppressive mandates across Canada that have laid waste to too many lives, livelihoods and are en route to producing a lost generation of children, there is finally a spark of hope for what it means to be Canadian.

Mandatory vaccination (which will likely face legal challenges in Canada, via section 7 and potentially section 2a of the Canadian Charter of Rights and Freedoms), has become a growing expectation from all levels of government. Trudeau’s administration has become ever emboldened with its’ overreach spreading across all sectors and aspects, affecting the fundamental ability to be part of society in Canada. However, when they messed with the truckers, they just may have messed with the wrong folks. 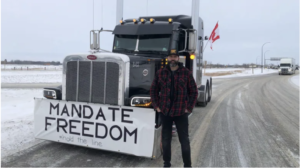 Canadian truckers have been crossing the border into the US and back for two years without any issues as they were deemed essential workers and exempted from vaccination requirements or quarantine upon return. This makes sense as these are the workers that bring everything into the country that isn’t either flown or freighted across the ocean, from food, to medication, to household goods and so much more. Some have even referred to the truckers as the ‘arteries’ to the heart of this country. In short, truckers keep the international supply chain chugging along for Canadians, especially during the harsh winter months.

However, in November 2021, Prime Minister Trudeau decided that this sector too, would be subject to the mandatory vaccination requirement that came January 15, 2022. Unvaccinated Canadian truckers would be subject to testing and quarantine when crossing the border back into Canada, while unvaccinated foreign truckers will now be turned away. President Biden echoed this sentiment for the US and his own mandate for truckers came into effect January 22, 2022.

Despite the many COVID restriction-related supply-chain disruptions that have already placed severe strain on Canada’s flow of goods, the federal government has held steadfast in its position to move ahead with these mandates on the trucking industry. The Canadian Trucking Alliance (CTA) estimates that as many as 32,000, or 20%, of the 160,000 Canadian and American cross-border truck drivers may be taken off the roads by the mandate. What is clear, is that the mandate will fuel shortages and cause further inflation (Canada’s inflation rate hit a 30-year high of 4.8% in December 2021). Even provincial leaders, such as Alberta’s Premier Jason Kenney have urged the government to extend an exemption that had been in place for truckers since the start of the pandemic. 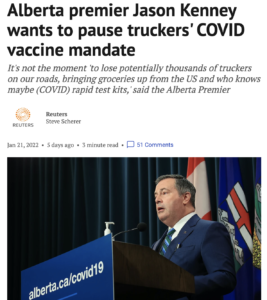 What is the Truckers Freedom Convoy?

The Freedom Convoy 2022 is a snowballing grassroots movement of more than 50,000 truckers who, regardless of their vaccination status, have decided to unite to take a stand for freedom of choice for everyone. They will do this by trucking across what we’ve always known and loved as the true north strong and free, into Ottawa on Saturday, January 29th 2022, to let Trudeau know that enough is enough. The convoy will comprise of three main routes departing from Vancouver, BC, Sarnia, ON, and Enfield, NS, all meeting in Ottawa. Smaller cohorts will drive through rural routes across Canada to meet in the capital with the main convoy. The routes being taken by the truckers can be found here.

The convoy’s GoFundMe page has received over $6 million in donations at the time of writing this article. The donation page lays out clearly, what the movement stands for:

“We are a peaceful country that has helped protect nations across the globe from tyrannical governments who oppressed their people, and now it seems it is happening here. We are taking our fight to the doorsteps of our Federal Government and demanding that they cease all mandates against its people. Small businesses are being destroyed, homes are being destroyed, and people are being mistreated and denied fundamental necessities to survive. It’s our duty as Canadians to put an end to this mandates.  It is imperative that this happens because if we don’t our country will no longer be the country we have come to love.  We are doing this for our future Generations and to regain our lives back.” 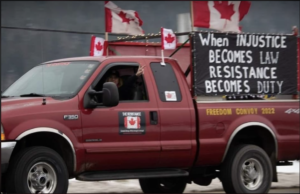 Why Are They Doing This?

These truckers stand for ending all mandates, not just those related to their industry but those crippling life in Canada as we know it.

The Convoy to Ottawa 2022 stands for freedom: for you, for me, for all of us as individuals and a country built by grassroot efforts, where diversity is our strength. Unlike our current Canadian governments, these truckers stand for what it truly means to be Canadian.

Many People Stepping Up

It’s not only the truckers who are traveling as part of the convoy that are looking out for their fellow Canadians.

Truckers who will put in extra hours and spend weeks away from their families to make sure that loads are delivered, have also spoken out in support of their Ottawa-bound colleagues since the convoy gathered momentum. One such trucker remarked on the cause’s Facebook group, that if all the truckers that supported the convoy actually went to Ottawa, Trudeau would simply hold-out until the country began to starve.

In a truly heartwarming and Canadian gesture of support, many across the country who aren’t truckers have been following the routes and waiting on overpasses from coast to coast, braving the frigid winter weather, to show support and gratitude. Others ‘adopting a trucker’ by opening up their homes to those trucking cross-country to offer what’s needed to make their journey that much smoother. 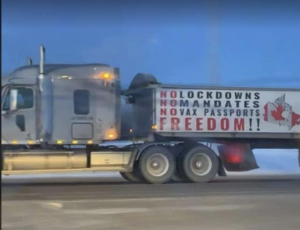 Further, the outpouring of support from people across the globe has been growing by the day, representing a diverse range of countries including, the US, Denmark, Austria, Pakistan, England, Mexico, Sweden, Thailand, Australia and Italy to name just a few.

The Canadian mainstream media has given mixed reports on the convoy from speculation that it represents a protest against unsafe and icy road conditions (though all Canadian winters can make for precarious driving conditions) to more recent and widespread reporting that the convoy is an attempt to end the vaccination mandate for truckers.

As this movement has grown at a rate unwitnessed before in Canada’s recent history, the international media outlets are starting to pay attention. However, it is noteworthy that like the domestic media, the only angle being reported on by outlets such as the Washington Examiner and the UK’s Independent (as well as several others like US News that directly use content created by Reuters), is that the convoy is driving to the nation’s capital to oppose border mandates.

“We want Canadians to know that the Freedom Convoy stands for the ending of all mandates. Not just those that impact truckers but all of the Covid-19 related overreach.”

How You Can Support Freedom Convoy 2022

Freedom Convoy 2022 is the official GoFundMe page where donations can be made.

Convoy to Ottawa 2022 is a quickly growing Facebook page, where all who support the truckers and what they stand for are welcome. The original page ‘Convoy to Ottawa 2022’ garnered over 600,000 members in just over a week before it was deleted by Facebook.

Adopt a Trucker is a Facebook page where one can join to volunteer to support those travelling across Canada by providing anything from a meal to a place to shower along their journey.

Show up to show support by seeing when the convoy will be passing through your town or city.

Sign the M.O.U. Canada Unity is a movement supporting the convoy and we were told the truckers will be presenting these signatures to the Governor General and need as many signatures as possible.

The World is Watching

In fact, it’s being reported that inspired by the Canadian convoy, Australian truckers are now organizing their own freedom convoy to Canberra that’s set to take place on January 31, 2022. 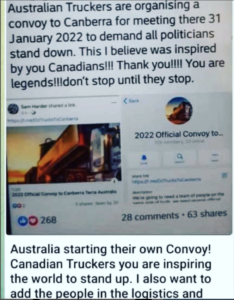 Mark January 29th 2022 down in your calendar because our truckers are doing something spectacular. It is about choice. It is about freedom. And ultimately it is about human spirit rising up and saying no institution, politician or person has the right to withhold the basic rights that every man, woman and child have claim to as a birthright, including that of bodily autonomy.

Freedom is not something to be bestowed or taken by another due to populist will. And, in all the chaos, confusion and division of the past two years, something absolutely affirming has happened: our truckers have come together and united as one with so many other fellow human beings and are rolling in from the whole of Canada, into Ottawa. As the world watches with baited breath, Canadians from coast to coast are doing what it takes to finally break the vice-like grip of authoritarianism. 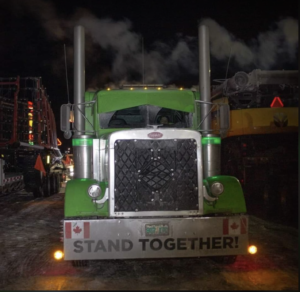 In the coming days, every Canadian has a choice to make: to either stand united with our truckers and the many supporting them, or to continue to let those who carry no liability or actual responsibility, make policy decisions that have ravaged the economy and completely failed our most vulnerable.

Our kids  are counting on us. And when all of this is over one thing’s for sure – there will come a time when our future generations will ask us to explain the choices we made and burden of those we didn’t.