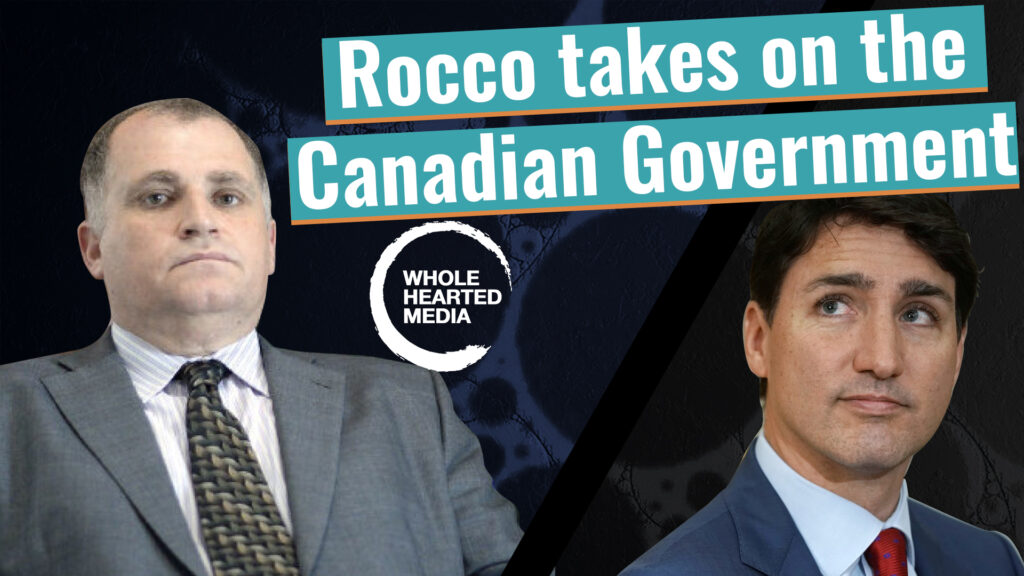 Leading Canadian constitutional lawyer, Rocco Galati, has filed a claim with the Superior court of Justice on behalf of his client and 7 other plaintiffs. They are suing:

And more. You can view the 196 page Statement of Claim here.

They are challenging the Canadian government in an unprecedented case, for some of the extreme measures during the Corvid-19 pandemic, which violated many sections of the Charter of RIghts and Freedom.

He recently sat down with Journalist, Rajie Kabli, in a highly anticipated interview regarding the lawsuit and  these extreme measures that have infringed upon Canadian Constitutional Rights and Freedoms.

These Canadian Charter of Rights and Freedoms violations include:

The violations for these extreme measures during the pandemic include, but are not limited too: closing down of businesses, the illegal detainment by by-law officers and peace officers who are engaging in unlawful search and seizures by demanding personal information that they are not entitled to, the severe violation against those populations at risk, i.e. person(s) of physical or neurological disabilities, especially children with special needs.

He demonstrates that the government has not taken into consideration the care of the elderly population during the pandemic nor looking at providing vital therapies in place for special needs children i.e therapy, playground and games for childhood development. The current measures will have severe and long term effects on children. Furthermore, the elderly population are literally dying under these self imprisoned measures.

Galati points out in his interview with Rajie, you can see the playbook of this plan from ten years ago.

It was written, scripted and planned before this pandemic even started. In a report dated May 2010, constructed by the Rockefeller Foundation, we find 4 scenarios laid out that they say provide philanthropic strategy. In one particular scenario, called ‘Lock Step’, it documents a virus that escapes a city and later theorizes how we, the global community, will have to deal with this scenario.

The gist of this report is summed up by one sentence, “How to Obtain Global Governance in a Pandemic.”

In addition to this report and the ten year mark, there was a special announcement made by Bill Gates as he invested 10 billion dollars with the agenda for world wide mandatory vaccinations. GAVI – The General Alliance Vaccination and Inauguration, is also included in this funding.

Has this report scripted our future? Or will the collective change this outcome?

WHO is responsible for all the odd measures being taken worldwide?

The World Health Organization, which is funded by Bill Gates, GAVI and others unknown at this time, are the billionaire oligarchs or technocrats who are working hard in leading the world narrative of the people’s future. Until today.

Rocco reminds people in the interview that if we follow the money trail, it becomes evident that further education and a more informed public will help serve a brighter future.

So where do Canadians stand in all this? Mandatory vaccinations, masking and lockdowns.

According to the Angus Reid Poll, a Canadian non-profit independent research committee:

Where does Canada’s top Constitutional lawyer Galati stand on all this?

As he states in his interview, lawyers look at evidence and that’s all he can place his judgement upon. He believes the current pandemic is, “A fascist scam. And if you don’t understand the geo-political and economic agenda in all of this, you won’t understand the policies.”

He also claims it’s not about a debate on whether there is a virus or not. There probably is. Is it more dangerous than the average influenza virus? The evidence says no. So what is this all about?

It can be captured by a quote Galati referenced to during this interview:

So where do we go from here?

Have we become an alpha type nation where only statistically 3% of society actually engage and run society? Have we become a tech republic where companies like Google and Gates are now in the healthcare industry? History has shown that constitutional and legal rights were brought about during revolutions.

Have we come to that point today in our history today?

Find out more, while watching Part I and II of Rajie’s interview below. Stay tuned for upcoming interviews here

“We can no longer live a massive lie.” – Rocco Galati.