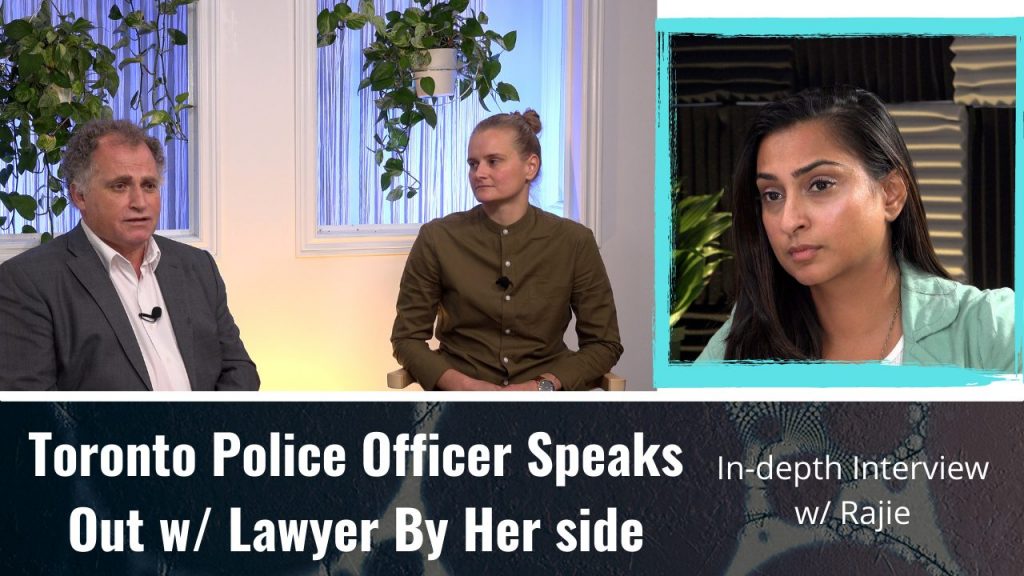 In this video, Rajie talks to Adrienne Gilvesy, an active-duty Toronto Police Officer, as well as her lawyer Rocco Galati. They discuss the jurisdiction and overall duty of police officers to enforce COVID health regulations that directly violate the Canadian Charter of Rights and Freedoms and question where things are headed.

Officer Gilvesy has been a Toronto Police Officer for twelve years and as a senior officer in the Major Crimes Unit. She quickly began to feel uncomfortable as her unit was called upon in the early days of the pandemic to enforce COVID mandates that she knew breached the Charter.

Health regulations have continued to change frequently, sometimes as often as every week. Officer Gilvesy comments that many officers have had little else to rely upon than the premise that they are ‘just doing their job’ in the application of oppressive and over-reaching rules they are given to implement.

In the video, Rocco raises some serious concerns surrounding a lack of police neutrality as enforcers of the rule of law. He explains how the pandemic has been heavily politicized, and challenges the duty and jurisdiction of police officers in their enforcement of health regulations.

Rajie goes on to clarify the role of police officers, (also known as ‘peace officers’) and questions whether officers are able to uphold the sanctity of their oath in relation to the many obvious Charter breaches that have occurred in enforcing COVID health regulations since March 2020.

Officer Gilvesy concurs about Charter breaches and cites that many officers fear the repercussions of speaking out, including money as a factor, where off-duty officers are paid extra in overtime.

Rocco warns about the possible lawlessness that can arise when everyone from government officials to bar owners take the law and its’ interpretation into their own hands. He also raises the dangers of creating a two-tier society through vaccination status.

Rocco points out that the rule of law is currently being used an instrument of oppression instead of being delineated by parameters such as the constitution and natural God-given rights.

Rajie raises the question of choice, where unvaccinated people are often told that they have a ‘choice’ to go get vaccinated to fully access society and employment. Rocco clarifies the inherent coercion that lies in this approach.

Officer Gilvesy reveals that the Toronto Police Service is using the same coercion tactics on its’ officers internally whereby everything from gym privileges to paid overtime duty is now no longer available to unvaccinated officers or those who do not disclose their status. She talks about how the most basic right, that of bodily integrity, is not being upheld or even recognized.

Officer Gilvesy shares how she found her inner strength to be able to speak up and against her employer. She clarifies that police should be impartial and apolitical as each officer is an independent agent of the Crown and should not be open to interference from politicians as they have been. She also talks with Rajie about her fear as to how the current political climate and the resultant application of the mandates is edging society closer to a state of medical apartheid.

Rocco clarifies how interference from government officials into how the police does its’ job is a chargeable criminal offence under the Criminal Code of Canada and also an obstruction to justice.

What do you think of the politicization of the police force as well as police overreach with applying health-based regulations?

What does freedom of choice mean to you and can it exist unless everyone in society has an equal right to their individual choice?

Comment on the video or article and let us know.

If this content resonated with you, please share on social media and let others know they are not alone in standing up for freedom of choice.

If you enjoyed this content please donate to the channel for more videos like this! We appreciate and value your support.

Got a story idea? Email us at info @ wholeheartedmedi